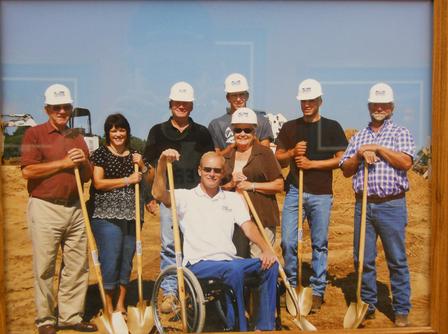 Sawing lumber is a traditon that the Meister family acquired many years ago. In 1935 Paul's father Martin, started a sawmill in Reedsburg Wisconsin, where he manufactured railroad ties and grade lumber. In 1970 Martin retired and Paul and his brother assumed control of the family sawmill where they had established an outstanding reputation in Railroad ties, grade lumber, and veneer log markets. In 1984 Paul bought his brother out of the sawmill, and ran the mill until 1988 when he sold the sawmill. After selling the sawmill Paul worked for the new owners for 5 years and then decided to rebuild again after seriously considering retiring.

When Paul started the new business he also had a new business partner, his oldest son Mark, who at the time owned a trucking company. The company that they established was known as Meisters Forest Products located at our current location in Endeavor in 1992. In 1999 the company expanded by adding the Black River Falls sawmill. To learn more about either mill, please see our "About Endeavor" & "About BRF" pages.

Throughout the years the company has created what would be reffered to by most as a motto, " We call to sell you the first load; after that the customer will call for the second". Our company believes that if we continue to create top quality products the customers will be there.

Currently Paul comes to the mill a couple days per week, while Paul's sons Mark and Matt own the mills. Mark manages the Endeavor plant and oversees the whole company, while Matt manages the Black River Falls Plant. Mark's sons Cody and Tyler have also began working for the company, bringing the 4th generation along with them.

Tyler graduated from Reedsburg Area High School in 2010, and began immediately working at the Endeavor mill. In 2011, Tyler was awarded the National Forestry Management and Products Proficiency. The company is very proud of Tyler for his hard work and dedication to the company and the Reedsburg FFA Chapter.

Cody graduated from Reedsburg High School in 2008 and attended University of Wisconsin-River Falls where he graduated in the spring of 2012 with a degree in Agriculture Engineering Technology. After graduating Cody also began immediately working at the Endeavor mill. After attending UWRF Cody has excelled in helping the company take on manufacturing some of our own equipment, as well as assisting with large renovations at both of our locations.